skip to main | skip to sidebar

Ashtabula and the Marine Museum

I am writing to thank you for the wonderfully moving song Ashtabula. My late father, who grew up right near the current site of the Ashtabula Marine Museum, shipped out as a night cook (dishwasher) in the 1930s.

He retired as senior deck officer in the old Cleveland Cliffs line in 1976, bought a sailboat and went right back out on the water. He passed away peacefully of old age on the 24th anniversary of the wreck of the Edmund Fitzgerald, November 10, 1999.

This past summer my two sisters, their spouses, various kids, and my wife and I got together in Ashtabula for FinnFest 2007. Nancy and I had a surprise waiting for the rest of the family, a display at the Ashtabula Marine Museum honoring our dad's distinguished career as a Great Lakes mariner. (See enclosed photo. That's me flanked by my sisters.)

Then a friend turned me on to your beautiful song. It brought tears to my eyes. I've ordered two more copies of the CD to send to my sisters as holiday gifts. I'll bet folding money that both will bawling like babies after hearing Ashtabula.

Anyhow, thank you again for that amazing song. All the best to you and yours in the new year. 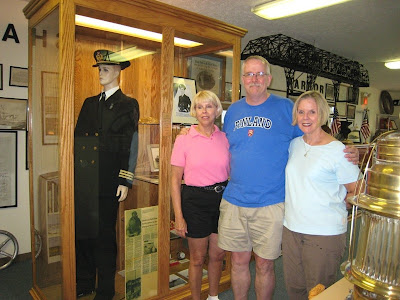 Beth Girdler
I am happily married to the warm and wonderful singer/songwriter, David Francey. We share many common interests, music, art and photography (as well as the love of three beautiful children)